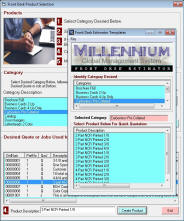 An incredibly easy to use program that converts your Digital or Professional Estimator into a Template Driven product. No longer search your existing quotes and jobs to find just the right kind of estimate from which to create a new quote. Just click on the Category Desired followed by the Product and your worksheet is instantly populated with almost 100% of your required input.

The two screens shown are: In Back, an input screen for capturing the quotation used to identify the product while the front screen illustrates the actual selection of the Category and Product used to create the estimate. Once loaded to the Worksheet, simply enter the desired quantity and quote it. It's that simple. 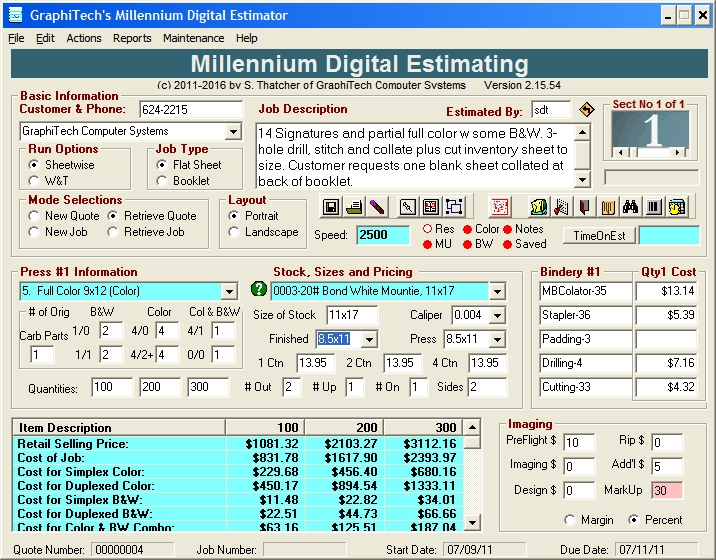 GraphiTech's Digital Estimator is the most Powerful, Accurate and Easy-To-Use software available anywhere! Using sophisticated dual-matrix lookup tables for click rates along with inventory, bindery and numerous utilities, you'll be amazed at how you ever estimated jobs before.

And our Basic Digital Estimator starting at just $175 will give you this incredible power without spending a fortune doing so. The Basic package includes everything needed to estimate even the most complex jobs (See full specs and Capabilities at above Link).

Up to nine options are available that you can add to this remarkable program to make it an even better way to estimate. Options include Artificial Intelligence Button, Full Bindery Edit, Stock Inventory, Price List Generator, Front Desk Estimator, Historical Ledger, Reports Package, Electronic Job Ticket, Invoicing and more.

In addition, the Digital Estimator interfaces with our other programs such as Job Costing, Job Tracking, Budgeted Hourly Cost Analysis, Scheduler and our Full QuickBooks Invoicing program that permits users to post jobs directly to QuickBooks IIF import files. If on GraphiTech Maintenance, the Full $1,475 program is FREE. Click Here to see the true power of GraphiTech's new Digital Estimator. Click Link for Special Pricing if New User or Not On Maintenance. 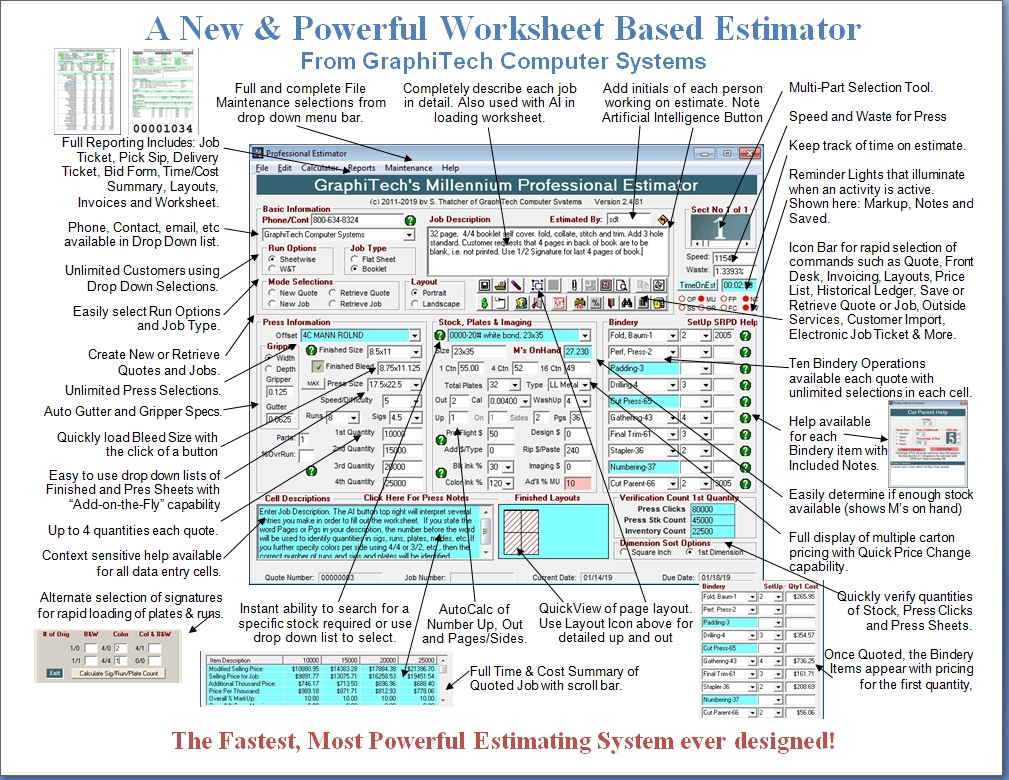 Now you can completely specify those toughest jobs in just minutes. The 8.5x11 Job Jacket prints in Portrait mode and includes Pre-Press Notes and full Job Description with additional sheets that include Pick Slip, Full Job Notes from All Departments and more. Other reports include Production Layouts, Quotations, Time/Cost Summaries, Delivery Tickets with job specific details never before possible... and all based on a single screen Worksheet. From Pre-press to Press to Bindery, each area of this incredible program enables the user to enter data for an order as well as data for an estimate or both!

And, by using an icon tray, numerous additional features may be accessed right at the Worksheet. These include an Artificial Intelligence Button, Full Bindery Edit, Stock Inventory, Price List Generator, Front Desk Estimator, Historical Ledger, Reports Package, Electronic Job Ticket, On Screen Layouts, Invoicing, Historical Ledger, Top Revenue Customer Report, Full Networking and more. In addition, stand-alone programs such as Budgeted Hourly Cost Analysis and QuickBooks Invoicing Interface are also included as part of the Full program. FREE upgrade if on Maintenance 3 Years. Not on Maintenance but own Legacy? Cost is $1,400 (Reg. $4,100). Click Here for Special Pricing if New User or Not on Maintenance.

One of GraphiTech's newest product is called TermSys Touch Job Tracking. It is a Real-Time Shop Floor Data Collectiion system utilizing both Touch Screen and a Bar Code Scanner at each collection terminal.

This product includes sample Scan Sheets, 5 badge holders, Wireless Bar Code Transceiver & Scanner, Software and Documentation manual for the Job Tracking System. Easily Upgrade Starter Pak to Network Version (up to 10 terminals) for an additional $675 or upgrade to Full Job Costing, Job Tracking and Integrated Reporting with Network and up to 10 stations for only $1795 complete. That's a $3,500 decrease over our prior version which contained separate Data Collection Module and Reports. See TermSys Touch Job Costing at Specials Page for more details.

In addition, GraphiTech offers the opportunity to have your Licensed Software reside in the cloud for easy access from virtually any device. Ideal for collecting data while on-the-road.

GraphiTech's Millennium KeySys is one of the most powerful, real-time data collection systems available anywhere! Utilizing a multi-drop network, KeySys operates as a network within a network and gives both the plant manager and production personnel both two-way communication as well as instant real-time data on each job.

From a single workstation you can view the entire shop floor and all activity, including employees logged into jobs, location of any job, active keypads, materials used and more.

See the specification sheet for this remarkable product. 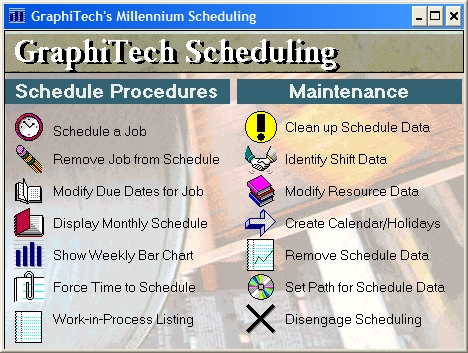 Our Automatic Scheduling program identifies the resources and time available whenever a Work Order is printed. Using the estimated time from the Millennium Digital & Professional Estimator, the time is added and compared to that available and either accepts the proposed due date or suggests an alternate date based on the resource loading.

Who is our founder?

The GraphiTech System was designed by Scott Thatcher.

Mr. Thatcher was associated with the Printing Industry for over 15 years as a pressman, camera operator, and typographer while working at his father's plant in Evanston, Illinois. In addition Mr. Thatcher is a graduate Engineer. He has provided programming support and analyses to NASA's Apollo Application Program for Cryogenic Gas Storage Systems and helped to develop sophisticated systems while employed at P&WA in West Palm Beach.

Since 1978, he has been developing software through GraphiTech for the Graphic Arts Industry. His expertise in both the fields of science and printing make him well qualified to undertake a program with this degree of sophistication. As Mr. Thatcher has said, "The variables involved in the printing process are just as complex as many state-of-the-art systems now on the boards. To be an "estimator" requires a high degree of logic and the ability to perceive the impact of many operations on the final product cost."

It was in those early years that a co-worker whose wife had a printing company asked Scott to develop an estimating system. At the time, there were only 7 companies involved in developing software and all the solutions ran on IBM 360's or larger. So, early in 1978 after looking over the various small computers that were available at the time, Scott concluded that a TI-59

programmable calculator was by far the best possible solution to a low cost estimating system. And after 4 months of programming in an Algebraic Operating System, he was off to Lubbock, TX (headquarters of Texas Instruments) to program the Eprom required for the heart of the system.

Kodak already had their camera programs embedded on these chips and there just wasn't anything else that had both the capacity, cost effectiveness and simplicity of the TI-59. Thus, the GraphiTech "AlphaTrack" system was born!

Then, with the help of a friend in the Quick Printing business, Big Red Q ordered almost the entire first run of chips in order to supply their franchisees with this incredible little machine.

Things were moving fast back then as companies like Radio

Shack, Zorba, Apple and Osborne were developing their computers using the CPM operating system or proprietary OpSys. Then, later in 1981 came IBM and an operating system called MS-DOS from a small start-up called Microsoft. In just three short years we had gone from running on a programmable calculator to running on no less that 8 different computers including one of the first multi-user Unix systems from Altos.

Between 1981 and 1990, GraphiTech Computer Systems mushroomed into a dominant player in the world of Printing Management Systems. Starting with a simple estimating program on a TI-59 and then later developing software for Multi-User and Server based systems. Software products included high-end Estimating with numerous automated features, Full Accounting (GL, AR, AP, & PIA Ratio Study Reports), Invoicing for third party accounting (DataPro Infinity and QuickBooks), Inventory Management, Scheduling, Data Collection including KeyPads with bar code scanners, Terminal data collection and personal hand-held scanners that could be used to capture data even while making deliveries. And the products are continuing to be developed...

Today, GraphiTech is focused on converting much of our software to the dot net platform.  This is a logical transformation since most of our middle line products had been written in Visual Basic.  In addition, we are reviewing products that can be developed with cell phone technolgy (both Android and iPhone) since we are certain the day will arrive shortly that most estimating and data collection will be done in the cloud. For sensitive data, we also believe that the corporate level computer will remain as the mainstay of Printing Management Software.

For powerful, accurate and low-cost methods of providing estimates, invoices and
real-time shop floor data collection, be sure to visit our product pages.